Alchi Choskor monastery is located approximately 69 kms towards the Western side of the main city of Leh. It is popular in the form of largest of all the gompas built that were built by Lotsava Rinchen Zangpo. He had ordered four families to take care of Choskor, as there was no monastic communities present during the 15th century. It was taken over by the Lekir Monastery and is under them today also. 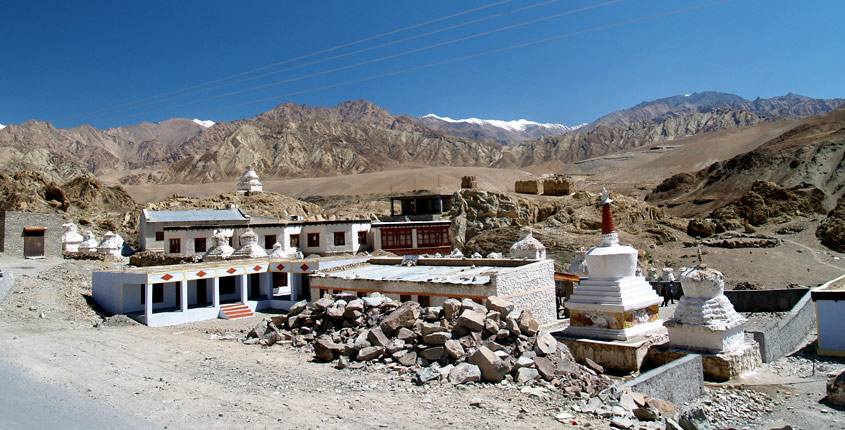 Alchi Choskor Monastery is known to be one of the most ancient Buddhist Monasteries of the north region in India. But it has a rigorous difference from the other Buddhist pilgrimages within the country, in terms of prayers and architecture. It is believed to be a Buddhist temple than complete Monastery. The carvings and wall paintings are different from any other in the surrounding area. Alchi Choksor Monastery is perched near the Rivers Zanksar and Indus. It is nearly 70 kms away from Leh. Many believe that the Monastery complex is about 1000 years old, but nowadays no monks are living or studying here. It is mainly a visiting place for the holy Buddhist scholars and tourist. One different and interesting characteristic of this monastery is that it is built on plane grounds, with backgrounds of high-rise Himalayan mountain ranges, which is different from other Monasteries in the Leh terrain. The Monastery always seems to be exceptionally realistic, yet thought agitating.

History
The historical date of the establishment of the Monastery has not been clearly confirmed so far, as there are numerous buildings included in the compound. Most of the people believe that the well-known Buddhist Rinchen Zangpo who was a translator came here in 10th century and constructed some Monasteries. Because of his efforts, many other Monasteries came into existence in Himachal Pradesh, Sikkim and nearby areas and nearly 108 Monasteries are accredited to him. These Monasteries are supposed to be owned by the Vajrayana sect which is of Tibetan Buddhism. Under his authority, a lot of artistic charities were done by the artists from Kashmir. After many years, studies and worship in the Alchi Choksor Monastery collapsed and it came into the control of the administration of other nearby Monasteries, till the 15th century. Afterwards The Likir Monastery took the responsibility of its maintenance.

Reaching There
Alchi Choksor Monastery is nearly 70 kms away from Leh and it takes around 3 hours to reach there by road. All along the way, the magnificent sceneries are pretty exotic with hilly terrains, grasslands, fields; snow covered mountains and the sumptuously flowing Zanskar and Indus Rivers. As coming close to the Monastery, visitors will pass through small villages, which are very much influenced by the Buddhist culture and the monastic presence.