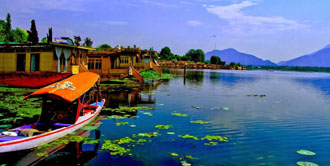 Jammu & Kashmir casts a spell on everyone who visits here. It's a dream of every Indian traveller to visit this 'Paradise on Earth' at least once a lifetime. Jammu and Kashmir is a holiday destination for every reason and for every season. It's a land which has inspired poets since centuries. It enchants and bewitches equally, be it in spring, summer, autumn or winter.

Kashmir is one of India's most beautiful and tourist popular regions and has been since the time of the great Mughul emperors. It's probably most famous for the houseboats on picturesque Dal Lake you've not really been to Kashmir until you've stayed on one - but there'' a lot more to the Kashmir Valley than just lazing on board.

Srinagar is the summer capital of the Indian state of Jammu and Kashmir. It is situated in the Kashmir Valley and lies on the banks of the Jhelum River, a tributary of the Indus. The city is famous for its gardens, lakes and houseboats. It is also known for traditional Kashmiri handicrafts and dry fruits.
The river passes through the city and meanders through the valley, moving onward and deepening in the Dal Lake. The city is famous for its nine old bridges, connecting the two parts of the city.

WHAT TO SEE (SRINAGAR) 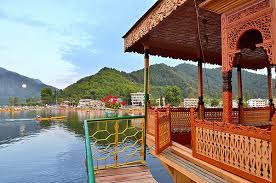 Dal Lake: This could well be Srinagar's lifeline and the favourite site of all honeymooners. The lake itself is full of flora that includes lotus and water lilies, and avifauna including kingfishers and herons. Get onboard one of the shikaras to go around the lake - they come with really pretty names, example - Honeymoon Lovers, The Paradise, Love Heaven and the likes! Along the shoreline is the boulevard that is home to numerous shops, hotels, gardens and parks.

Nagin Lake : Nagin is generally held to be the most beautiful of the Dal lakes. Its name comes from the many trees, which encircle the small, deep blue lake. Nagin is only separated from the Larer Dal lakes by a narrow causeway and it also has a number of houseboats moored around its perimeter. Nagin Lake, which is usually thought of as a separate lake, is also divided from Dal Lake only by a causeway. The causeways are mostly suitable for walkers and bicycles only so they make a very pleasant way of seeing the lake without having to worry about traffic or Shikaras.

Hari Parbat Fort: Another Mughal construction, it stands on the hill by the same name and commands an awesome view of the city. It speaks the legend of how the demon Jalodbhava was crushed under this hill, when Goddess Sati dropped a pebble on his head, which expanded to become the massive Hari Parbat. As such it is also home to several religious shrines, including the shrine of Makhdum Sahib. Located a little away from this is the Masjid of Akhund Mullah built in limestone. So revered is this site that locals believe that over 30 crores Hindu Gods and Goddesses reside here!

Shankaracharya Temple: Located on the Shankaracharya Hill, this temple is dedicated to Lord Shiva and is accessible by a flight of stairs. It overlooks the Kashmir Valley and its inner sanctum has Persian inscriptions. The original dome-shaped ceiling has been replaced by a more modern ceiling.

Pratap Singh Museum: Located in Lal Mandi, this museum houses an interesting collection of Kashmiri exhibits, including the illustrated tiles found near Harwan. Open from: 10.00 am-5.00 pm (Wednesday closed)

Hazratbal Mosque: Undoubtedly the most important Muslim shrine, the white marble Hazratbal shrine is located on the left bank of the Dal Lake, and is reflected in its waters. Its significance comes from the fact that it is home to a hair of the Prophet, which is displayed to the public only on special occasions. Hazratbal has a distinct architecture and is the only domed mosque in Srinagar. 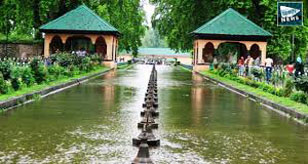 MUGHAL GARDENS
Kashmir was a favourite of the Mughal emperors who visited it as often as they could. Cool and refreshing after the plains of North India where the business of governance kept them, they planted gardens with stepped terraces and flowing watercourses. When they rested in their gardens, they dreamt they were in paradise.

Shalimar Bagh: Built by Jehangir for his wife Nur Jehan, Shalimar Garden is a wonderful combination of gardens and lakes. It has four terraces, rising above each other as steps and has a canal, built with polished stones, that is supplied water from the Harwan.

Nishat Bagh: Located on the banks of the Dal Lake againt the Zabarwan Mountains, Nishat Bagh, or Garden of Bliss, is known for its panoramic views of the Pir Panjal Range.

Chasma Shahi: Originally designed by Shah Jehan, Chasma Shahi is a strikingly made terrace garden commanding superb views of the Dal Lake and the mountains nearby. The cool spring water flowing here is believed to be extremely refreshing.

Pari Mahal: This was at one time the Royal Observatory. Located next to Chashma Shahi, it is a well-laid out garden, located almost on the ridge of the mountains overlooking the Dal Lake. Visit it at night when it is brilliantly illuminated.