Ladakh is a haven of picture-perfect views. The mountainous terrain provides ample opportunities to those looking to mix romance with dramatic natural beauty for their pre-wedding photo shoot. Here are our top six photo shoots that took place in lovely Ladakh. 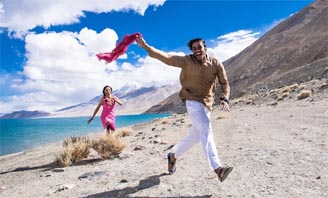 An exquisitely shot film by photographers and cinematographers Wedding Nama, with music exclusively produced by the same, stunning cinematic experience with gorgeous outdoor shots. Shot in the beautiful region of Ladakh, the film shows this location in the state of Jammu and Kashmir from a different perspective.

At Wedding Nama, we focus a lot on creating personalized expressions in photographs and film. We're known as trendsetters and this reputation comes from presenting ideas that have not been done before. In today's internet-of-everything world, people are content with picking up references and replicating them. But we'd rather work to create unique, original concepts like last year, when we shot a proposal/save-the-date video entirely underwater. As we chatted with this couple, we realised they wanted elegance and class and so we came up with 'Talaash', as a concept. We would need stunning backdrops to tell the story perfectly and that is how we decided to shoot in Ladakh.


Movies Shooting in Ladakh can be both physically challenging for crew members (due to hi altitude) as well as logistically challenging given the extreme changing weather and terrain conditions. we can provide a team that fits your budget. Films can also take advantage of the local aesthetics of Ladakh, we are a resource of Ladakh and Tibetan talent, costumes, decor and artisans.


No permission is required for ordinary photography or video cameras. However, for movie filming in 16 mm/35 mm, a special permit is necessary. The procedures are fairly complex, so please apply at least a year in advance. The application should be made at the Indian Embassy or Mission in your country of residence. The Indian government requires complete details of the synopsis of the film, location, exact period of shooting schedules, bio-data and passport details of the crew members and a complete list of equipment to be imported.

Every location in Ladakh is picturesque. Keep your eye out for the offbeat along the way to avoid the tourist crowds in places like Pangong, Tso Moriri and Nubra Valley at sunset.
Ladakhi sunsets are stunning so try and find a place where you can avoid the tourists and focus on the dramatic shadows on the mountains and changing colours of the lakes. Look at weather forecasts before you plan. Ladakh is a very peaceful place, so please be respectful.

3-IDIOTS
A landmark movie in the history of Bollywood, your desire to travel to Ladakh will be intensified thousands of times, when you see this movie.
The Idiots finally reach Rancho's (phunsukh wangdu's) school, which is actually the 'Druk white lotus school' in ladakh
The beautiful Pangong lake in Ladakh, where Kareena Kapoor finally meets Aamir Khan. So does the water really look so clear and blue? Well…almost, although they do touch it up (to make it look better) while editing. 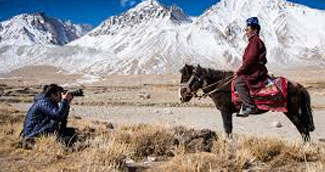 Leh: Capital of Ladakh, Leh has been traditional and important junction on the famous Silk Route of the antiquities.
It has enjoyed close trade relations with Central Asia.

Shanti Stupa: Japanese Stupas made for world peace, sets picturesquely on the hilltop above Leh.

Hall of Fame : This is a glorious museum constructed by Indian army. You can see biographies of eminent defense personalities, images and weapons used during Kargil war, Siachen and its heroes and their daily instruments and lifestyle of Ladakhi people.

Hemis Gonpa:
Hemis Gonpa is considered as the largest and richest monastery in Ladakh. The famous annual festival day called 'Hemis Tsechu' has been declared as the state holiday.

Shey Palace:
15 Kms. south of Leh, Shey was the seat of power of the King of Ladakh. And Three-storey statue of Shakyamuni Buddha is only of its kind in the region.

Thiksey Gonpa:
Thiksey Gonpa is famous for its three-storey Maitriya Buddha's statue and the photogenic view of the Gonpa, which looks alike Potala Palace of Lhasa in Tibet.

Alchi Choskor:
Alchi monastery was founded by the great translator Lotsava Rinchen Zangpo in 11th century AD. The exquisite murals of Alchi Choskor are world famous and it is said that the artists were specially brought from Kashmir.

Lamayuru Gonpa:
Lamayuru Gonpa is the oldest monastery in Ladakh, which is around 125 Kms from Leh on Leh-Srinagar Highway. Surrounded by picturesque moonscape Lamayuru Gonpa belongs to Drigung sect of Tibetan Buddhism.

Nubra means 'Valley of flowers' situated on Pakistan Border across Khardongla Pass 18,380 ft, the highest motorable road in the world.

Deskit:
Administrative headquarters of Nubra valley, and offers variety of accommodation to travelers. It has a monastery atop a hillock from where you can also enjoy panoramic view of the valley. Deskit sand dunes and double-humped camel ride reminds of silk route tradition.

Sumur:
Sumur is a village across the Shayok River along lush green meadow. Samstanling monastery of Gelugpa sect of Tibetan Buddhism with historical and religious significance attracts both devotees and tourists.

Panamik: Famous for hotspring and it was a major stopover for Caravans of Silk Route before continuing further journey towards Leh.

Changthang:
Tsomoriri Lake is located in Changthang approx. 240 Kms. from Leh. The Lake is around 28 Kms. long and around 8 Kms wide at an altitude of 14,000 ft, above the sea level. It harbors many species of migratory birds including Brahmini Duck, Rudy Shelduck etc. The Korzok village settlement with a monastery close to the lake has its own appeal.

Tsokar:
A twin lake Tsokar and Tarsaphuk tso form the part of a wide picturesque valley with many wildlife including migratory birds, wild asses (Kyangs) and Changpa nomads with thousands of livestock including sheep, goats and yaks live in their tents around the lakes in the vast expanse of pasture.

Pangong is approx. 140 Kms. away from Leh, situated at an altitude of 14,000 ft. above the sea level. The Pangong Lake is around 71 Kms. long but only 25% of the Lake is in India rest falls in the share of China. The vast and serene lake displays a spectacular color variation from dark blue to turquoise green during the day.


Kargil:
Kargil, headquarter of Kargil district, is the central meeting point between Srinagar, Leh and Zanskar with almost equal distances from all sides. Shia Muslim populated town has hotels and guest houses for tourists traveling between Leh, Zanskar and Srinagar.

Drass:
Located on Leh-Srinagar highway is second coldest inhabited place on earth. A magnificent view of Tiger Hill can be enjoyed from the main road. It has memorial museum of Kargil Heros and 10th century rock carved Buddhist statues.

Suru Valley:
A lush green valley on the way to Zanskar with Shia population is famous for magnificent closer view of Nun Kun glacier peaks and giant rock carved statue of Buddha.

Zanskar:
Zanskar is most isolated region of Ladakh, situated in the Kargil district of Ladakh region, approx. 430 Kms. away from Leh Town. Large number of Buddhist monasteries such as Karsha, Phuktal, Zongkhul, Stongdey, Sani and Bardan etc. and the interesting folklores, myths and startling natural beauties attract thousands of tourists to this land.