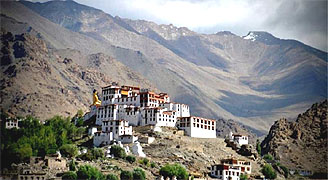 The Likir monastery consists of the shrines inside the monastery complex. This monastery is the home for 120 monks, which resides in the monastery dwellings only. This complex also has a school where only 30 students studies. This monastery has two assembly halls named as New Dukhangs and old Dukhangs. The old Dukhang has a statue of the Bodhisattva, Amitabh, Sakyamuni, Maitreya and Tsong Khapa. The courtyard has a painting on thangka of four guardians of four directions and wheel of life. This monastery stores the old manuscripts, old costumes, earthen pots and thangka collection. The monastery also has a huge Maitreya Buddha statue which is 23 meters high covered with gold and it is said to be the future Buddha.

The new Dukhang is 200 years old which has a statue of Avalokitesvara with 11 heads and 1000 arms. The walls besides the statue have paintings of 35 Buddhas and Sakyamuni.

Likir monastery gives the venue for the annual event of Dosmochey, in which people gather for the offerings. This event, according to the Tibetan calendar, is held from 27th to 29th day of the 12th month. Sacred dance is the main attraction of this event. Throughout the year, some procession is held in the monastery. These processions are held at the main favorable day in which it starts from the back side of the main temple and finishes at the courtyard of the main temple.

Festivals
The Likir Monastery celebrates its annual festival from the 27th to 29th of 12th Tibetan month. The festival sees votive offerings known as Dosmochey apart from the performance of the sacred dances. The festival will next be celebrated on February 15-16 2007.

HOW TO GET THERE
Road: A single bus links Likkir to Leh , leaving Leh in the afternoon and returning the next morning