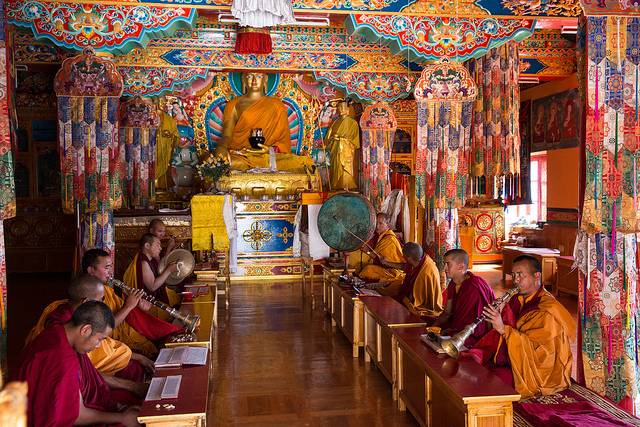 Matho Monastery is placed 26km from south east of Leh. It mainly belongs to Saskya order.Matho Gompa Ladakh was founded by Lama Tugpa Dorjay in 16th century.The village of Matho is located at the mouth of a deep gorge running out of the Zanskar Range and across the Indus. Matho Gompa ladak is just behind the Thikse Monastery.

Matho Gompa is the only representative of the Sakyapa sect of Tibetan Buddhism in Ladakh. Matho Gompa Ladakh is the only example of Sakyapa sect of Tibetan Buddhism as it does not lie on highway from Leh,so there are less visitors comes to visit this monastery. It is known to outsiders for its annual Oracle Matho Nagrang Festival that is celebrated on 14th and 15th day of first month of the Tibetan calandar. Beside this there are two oracles which are known as Rongtsan are said to inhabit for a few hours the body of two monks.

Matho and Skidmang in the eastern Ladakh (130km to the east of Leh) are the only example in Ladakh of the Sakyapa sect of Tibetan Buddhism. Because Matho does not lie on the main highway from Leh, it sees fewer visitors than Hemis, Thiske or Shey. However, it is known to outsiders for its annual Oracle Matho Nagrang Festival, held on the 14th and 15th days of the first month of the Tibetan calendar. During this festival, two oracles, known as "Rongtsan", are said to inhabit for a few hours the body of two monks. The purpose of these oracles is to attempt to predict the fortunes of the local village communities for the coming year. The monks that are to be the oracles vehicles are chosen one every two years for a duration of 4 years. The first year the monk will have to meditate for 9 month before the festival. The three next years the meditation will last 3 months. The selection is done by lots: one name is drawn from a bowl where all monks allowed to be oracles have put their name written on a paper.

There are images of Sakya Pandita and other Sakya lamas.Museum containing Number of old thangkas that are brought from Tibet in 15th century. Masks and robes which are dressed by lamas in festival can be seen here.of Matho monastery ladakh takes place during Buddhist new year.

Annual festival of Matho Gompa ladakh is celebrated on 14th and 15th day of first month of the Tibetan calandar.Beside this there are two oracles which are known as Rongtsan are said to inhabit for a few hours the body of two monks. These monks are considered as the oracle vehicles for the next four years and one every year. These monks purify themselves doing fasting and meditation in order to have suitable receptacles for receiving the oracles spirits.