Sankar Gompa Monastery is an Imperial Monastery. It is situated on the border of Khardung La Pass on the way to the Nubra Valley. It is about 3 kms away from the north of Leh. A 30 minutes walk is needed to reach Sankar Gompa from the centre of the . The attractive two-storied complex and the fluttering beautiful prayer flags which are of different vibrant colors surrounded by the stone walls of the farmhouses can be seen from far away. 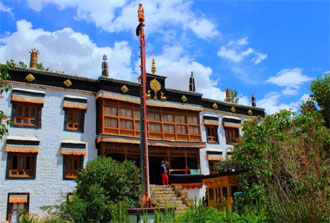 Sankar Gompa Monastery is a modern type of Monastery with striking cluster of buildings erected in the midst beautiful tall trees across the town, in the region of Khardung La which is a 5,359 m pass that goes from Leh to the Nubra and Shylock Valleys.


The Sankar Monastery has steps that go to 'Dukhang' which is also known as the assembly hall. To reach Dukhang one has to go all the way through a double door entrance, while on the right side of the doors, there are three green colored drums which are located in the area which is the place for Gyeskos. On the left side of Dukhang, the entry door goes to the Wheel of Life with the Yama holding it.
The exquisite paintings of the walls of the Sankar Gompa Monastery carry images of mandalas along with the details of the Tibetan calendar. This beautiful and sacred Monastery includes guest rooms and an attractive library. According to the routine a lama from this Sankar Monastery makes a visit every morning, day and evening, to the fort which belongs to the mid-sixteenth century, at Namgyal Tsemo.
Namgyal Tsemo is located at the crest above Leh to manifest the rituals at the holy temples which is associated with the fort.

Reaching There
Leh can be reached by train; from Leh the nearest railway station is Jammu which is nearly 734 km away.

There are also air services are available from Delhi to Leh and also from Srinagar, different airline companies are offer regular flight services.