Shanti Stupa is a Buddhist white-domed stupa on a hilltop in Chanspa, Leh district, Ladakh, in the north Indian state of Jammu and Kashmir.

A relatively new addition to the rocky skyline around Leh is the toothpaste white Shanti Stupa above Changspa village, 3km west of the bazaar. Inaugurated in 1983 by the Dalai Lama, the "Peace Pagoda", whose sides are decorated with gilt panels depicting episodes from the life of the

Buddha, is one of several such monuments erected around India by a "Peace Sect" of Japanese Buddhists.

This stupa is a round structure and direction is marked to go around in clockwise direction.
A platform is there in front of the Stupa and from here good view of Leh town and surrounding areas are available. Markings are there showing direction of Shindu Ghat and Khardungla pass on the outer wall of the stupa. As per the direction and details given the aerial distance of Khardungala Pass is 9.50 KM ( By Road it is 38 KM )

Usually tourist visit this place in afternoon hours after visiting Leh Palace but morning time is best as light directly falls on the Stupa.

Structure of Shanti Stupa
Shanti Stupa is perched at an elevation of 4,267 meters and offers the breathtaking view of the Himalayan ranges that surround this majestic structure. You need to jot down a short trek of 15 minutes from Changspa to the stupa. The Shanti Stupa is constructed on two levels. The first level houses the gold embellished statue of the Buddha and the Dharmachakra (the wheels of life), where the devotees move the wheels while they pray to God for their prosperity. 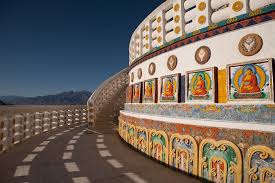 The second level of the stupa depicts the life, nirvana (enlightenment) and the death of Buddha. You can take a round of the stupa praying and enjoying the astonishing beauty of Ladakh.

How to Reach Shanti Stupa
Located on the top of the hill Chanspa, 15 minutes of walk is required to reach the Stupa on the hill top from the foothill.

Tips
1. Reaching to the hill top requires a trek, make sure you are in your comfortable attire.
2. Do not miss the view of Shanti Stupa at night.