Shey Monastery is located at a solitary hillock at a distance of 15 km away south of Leh. This monastery is also called Shey Palace which was once the residence of the royal family which was got constructed by the first king of Ladakh, Lhachen Palgyigon. 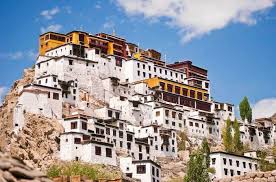 The palace in which the monastery is located used to be the summer retreat of the royal family of Ladakh. Shey Monastery is believed to have been built in 1655 by Deldon Namgyal, in the memory of his father, Singay Namgyal. The gompa is known for its colossal copper-gold gilded statue of a seated Shakyamuni Buddha. This statue is reckoned to be the second largest Buddha statue in Ladakh.

Main attraction in Shey Monastery is twelve feet Shakyamuni Buddha's statue. It is made by molding copper and is the largest statue in the region.

Getting There
Getting to Shey Monastery is easy from Leh. One has to hire a cab or bullet/other bike to reach the Shey Palace, which is on Delhi-Manali Road, some 16 kms from Leh City.